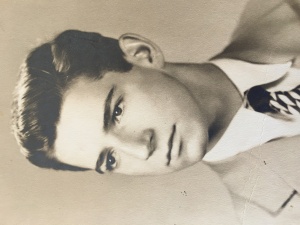 On July 4th, 2020, Eugene Pawlikowski died peacefully from complications of old age in the company of his kind hospice caregivers at Encore Assisted Living in Ellicott City, MD.

Gene was a true son of the little coal town of Barnesboro, PA, returning faithfully every year throughout his life for countless family gatherings and reunions. He was the 6th child born to John and Hedwig Pawlikowski, on January 3, 1932, in Barnesboro, grandson of Stanislaw Pawlikowski, who immigrated to the U.S. from Gliwice, Poland in 1898. Gene’s successful immigrant grandfather was a lifelong inspiration, influencing his strong connection to all things Polish. Gene’s early years were spent at St. Stanislaw Kostka Parish School, where he was a diligent student, altar boy and favorite of his beloved Mother, Hedwig, who died when he was only 10. Throughout Gene’s life he had difficulty speaking about his Mother without choking up. His boyhood years were filled with sports, and he was one of a long line of Pawlikowski boys who led their Cambria County high school football teams, playing quarterback under the Friday night lights. After his service in the U.S. Air Force during the Korean War, Gene was recruited by Joe Paterno, then a young assistant coach, to play quarterback at Penn State University. Instead he chose Pitt because of the many off-season job opportunities in the big city. Gene walked on as backup quarterback and earned a scholarship for the next three years, playing with Pitt icons Joe Walton and Corky Cost. Gene earned his degree in Electrical Engineering, and while working off-season as an orderly in the West Penn Hospital Psychiatric ward met his future wife Deloris, who was an R.N. at West Penn. Deloris had heard about a football player in the Psych Ward reading Shakespeare to the patients to prepare for an English exam, so she went up to explore and found the complete cast of Hamlet dramatizing the play as Gene directed them. A year later in 1955 they were married and proceeded to raise five children.

In the mid-1960’s Gene moved his family to Silver Spring, MD to attend University of Baltimore law school and work for the Department of the Air Force. In 1970 he received his law degree and specialized in patent law, which he practiced at Johns Hopkins Applied Physics Laboratory. Gene spent 10 years in the 1970’s coaching all three of his boys in CYO football at St. Camillus Parish, where he was also active as a church cantor. There are over a hundred St. Camillus youth football alumni who had the pleasure of playing on Gene’s fun and winning teams. His connection to the Church was strong even in the context of sports, as he established a tradition of taking his players to Mass in uniform jerseys on the evening before big games.

In the 1980’s Gene became involved with Our Lady Queen of Poland Parish in Forest Glen, MD, singing in the choir and serving as Commander of the Polish Legion of American Veterans Post 191. This Polish language parish was energized by Solidarity-era exiles escaping from communism who needed a place to worship. The old stone church built in the 1790’s was lovingly restored under the leadership of the established, older parishioners like Gene. For two decades Gene sang in the choir and led the Polish Legion in its service to veterans, visiting nursing homes and deploying the Color Guard to assist at many funerals of Post members. A notable achievement during these years was lobbying the U.S. Congress to accept the newly freed Polish Republic into N.A.T.O., the North American Treaty Organization, which finally accepted Poland in 1999. Gene was a frequent guest of Polish Ambassador, Jerzy Koźmiński, who awarded him the Republic of Poland’s Civilian Virtuti medal as thanks for his tireless lobbying of U.S. Government agencies to accept this loyal ally. Many of Gene’s family members have fond memories of lavish Polish Embassy receptions. Also, during this time Gene worked with Baltimore Polonia and Senator Barbara Mikulski to raise funds and secure permits for the construction of the National Katyn Monument near Baltimore’s Inner Harbor, commemorating the 15,000 Polish Army prisoners massacred by the Soviets in Katyn Forest. Gene leaves behind numerous comrades in the Baltimore-Washington Polonia community. His many other interests were alpine skiing, running, tennis, flying (he was a private pilot), foreign languages, world history and his grandchildren’s sports events. Gene has finally come home to Barnesboro for his last family reunion, to be interred in St. Stan’s Cemetery near his Mother. He is survived by 2 brothers, Ted and Joe, 5 children: Gene Jr., Jennifer, Stephen, Peter and Emily, 7 grandchildren, 4 greatgrandchildren, and an army of beloved nieces, nephews, grandnieces, grandnephews and cousins. Gene took to heart the words of his older brother, Buck, that if you are invited to join the Pawlikowski Family in any way, by friendship, engagement, marriage, divorce, etc., that was enough to be considered a member of this family, no matter how strong or weak the blood connection. Gene’s family was the bedrock of his good character and an endless source of happiness. It is only fitting that he now returns to rest in peace in these gently rolling hills of his youth.  Family and friends are invited to a viewing from 9:00 – 10:30 a.m. Tuesday, July 14, at Moriconi Funeral Home, Inc., Northern Cambria. A Funeral Mass will follow at 11:00 a.m. at Prince of Peace Catholic Church.  Fr. Matthew Baum officiating.  A reception at the Polish Legion will follow.

To send flowers to the family or plant a tree in memory of Eugene J. Pawlikowski, please visit our floral store.